Brunetti’s father-in-law asks for a favour: investigate the adult adoption by an old, old friend, of a handsome younger man with questionable motives….

Author page: Unto Us A Son Is Given – Donna Leon

Set against the familiar background of Italian corruption at all levels, The Temptation of Forgiveness is our 27th police procedural in the erudite company of Commissario Guido Brunetti.

When a man is found badly injured after a late night attack on the steps of one of Venice’s many bridges, the victim’s wife turns out to be one of Paola’s colleagues, who’d recently spoken with Brunetti concerning her son’s suspected use of drugs.

As Brunetti and his colleagues – Commissario Griffoni,  Ispettore Vianello and Signorina Elettra – investigate, preconceptions and prejudices come into play, and moral dilemmas abound.

An early encounter with Guido Brunetti. Carlo Trevisan, a leading Venetian lawyer, is found murdered on a train on its return to Venice.

Things get uncomfortable at home when Brunetti learns that his teenage daughter Chiara was at school with Trevisan’s daughter, and asks her to help him find out more about the family – much to Paola’s anger.

Brunetti is asked to investigate the attack on the teenage grand daughter of Contessa Lando-Continui, a friend of his parents-in-law, which left Manuela with a mental age of 6-7 …. 15 years ago.

With the by now familiar an not strictly by the book assistance from Signora Elettra, and with Commissario Claudia Griffoni as his co-investigator rather than trusty Vianello, we see Brunetti comfortable working in a predominantly female context, and see Venice through female eyes. 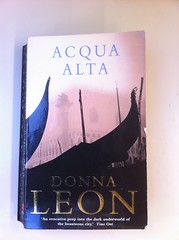 An early outing by Commissario Brunetti, Sergeant (still) Vianello and Signorina Elettra who has obviously only just started her career as Patta’s PA.