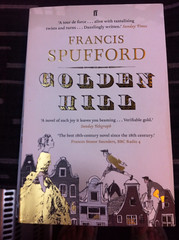 Leaving the Roman Empire on the cusp of change, Golden Hill brings me to the British American Colonies in 1746 – and the arrival of mysterious Mr Smith in New-York, where the city’s Dutch heritage is still strong and the sugar/slave trade profitable.

A modern take on the 18th century page turner, done in a day down in Walton – and with great pleasure.