Another slow start. The Germaine Greer parallels felt a little too blunt.

Once I got past Greer Kadetsky’s first name and Faith Frank’s character, this novel about women, friendship and feminism through the late 19th and early 20th century was a speedy and timely read.

Minnesota teen’s account of the summer she looked after a four year old boy, Paul, who dies of cerebral oedema, his Christian Scientist parents, in particular his scientist father Leo, refusing to seek medical help.

(And no, I didn’t read this in a matter of hours on 19 May – I’d almost finished it before heading up to Penrith on Friday and needed to take a longer read with me… hence When Breath Becomes Air.) 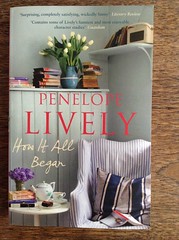 A chance find on the Walton bookshelves, I suspect this was one of the books we inherited from Janet or John at the caravan. Just right for a blustery Bank Holiday Monday and ensuing working week.

We spend a few months in the company of multiple Londoners, born, bred and immigrant, whose lives are all affected by the random mugging of 77 year old Charlotte. An exploration of the butterfly effect and the characters that inhabit modern middle class London.

Author page: How It All Began – Penelope Lively

Barbara Pym was a Kate Macdonald tip. A good one.

In The Sweet Dove Died, Pym strikes me as a more acerbic version of Tessa Hadley, Penelope Lively, Margaret Forster, with a period setting a generation or two earlier as Leonora, a lady of a certain age, dallies with two West London antiques dealers – handsome young James and his rather more portly but prosperous uncle Humphrey.

Georgy Girl completely confounded my preconceptions – in fact there was a wholesale misunderstanding of the theme and plot on my part! Yes, there’s a baby and a single mum, but it’s not Cathy Come Home.

George has what we could call “low self esteem”, and continuously compares herself unfavourably to glamorous gazelle Meredith and indulges in unrequited love for Jos.

Her parents are live in domestic servants for the wealthy West Londoner Leamingtons, where Ted is James Leamington’s besotted valet, and her mother is the family housekeeper and cook.

George herself is a surrogate daughter to James, although we never really learn Mrs Ls thoughts on the matter. He’s funded George’s private education, music and dancing lessons and has converted a large room in the Leamington’s presumably large London house to serve as George’s dance school.

Everything changes when Meredith tells Jos that she’s pregnant as that she wants to keep the baby “this time”; and James asks George to become his mistress.