A good read. You learn a lot, and think a lot – which makes it sound boringly worthy. But it isn’t. 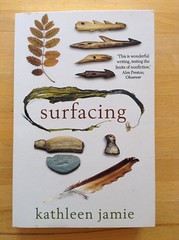 Another beautiful collection of essays; some long some short, all thought-provoking.

One of those books I set aside… Partly because of the lure of Lethal White, and partly because I found the structure a bit of a slog: The Secret Life of Trees reads a bit like a list of trees padded out with taxonomic and evolutionary background. I craved some social or history detail.

I feel I ought to pick it up again at some point, seeing as I’d just got to Order Fagales aka Oaks, Beeches, Birches Hazelnuts and Walnuts, which covers most of the trees here at Forty Acres.

Publisher page: The Secret Life of Trees: How They Live and Why They Matter – Colin Tudge

From emancipated Eigg to the tidal mudflats of Essex, Patrick Barkham visits 10 (?) different islands off the shores of the British mainland, exploring the history, geography, people, wildlife and present day culture on each.

In tandem, snippets of the life and islands of novelist Compton Mackenzie.

Publisher page: Islander: A Journey Around Our Archipelago – Patrick Barkham

The Invention of Nature is Andrea Wulf’s biography of Prussian scientist-naturalist-ecologist-explorer, Alexander von Humboldt, whose travels in the Americas gave us Humboldt’s Penguin, amongst many, many other things, and whose renown resulted in place names ranging from Mare Humboldtianum on the moon to Humboldt University in Berlin. Most importantly, via the publications,  lectures and correspondence that occupied Humboldt for the majority of his long life, he developed the concept that has been called Humboldtian science – a holistic view of science and nature, climate, the environment and ecology, and by extension encompassing art and society.

During his lifetime he engaged with politicians, revolutionaries, scientists and artists – Thomas Jefferson, Simón Bolívar, Charles Lyell, Johann Wolfgang von Goethe – and his writings continued to influence key scientific, cultural and artistic developments of the 19th and 20th century; Darwin, Thoreau and John Muir were all fans, as were George Perkins Marsh and Ernst Haeckel who I’d not heard of before reading this book.

And you’ve never heard of him.

Not directly related to Humboldt, a quotation that I liked appears at page 324

‘Solitude,’ Emerson warned him [Muir], ‘is a sublime mistress, but an intolerable wife,’

Author page: The Invention of Nature: The Adventures of Alexander Von Humboldt – The Lost Hero of Science