I regularly walk along the South Bank in the early morning, jostling with the joggers training for the marathon and construction workers on their way to Sea Containers House.

As well as appreciating that sunrise seems to be getting earlier in giant strides at this time of year [early March, when I took the photos], I also spotted four paving slabs with poetry carved into them on the riverside walkway. Three are by the Royal Festival Hall, the fourth is the other side of Hungerford Bridge up towards the London Eye.

I’ve not been able to find anything out about their origins – given how cracked they are, I’d say they’ve been there for some time – so if you do know, please do leave a comment under one of my photos.

Here are the pavement poems: 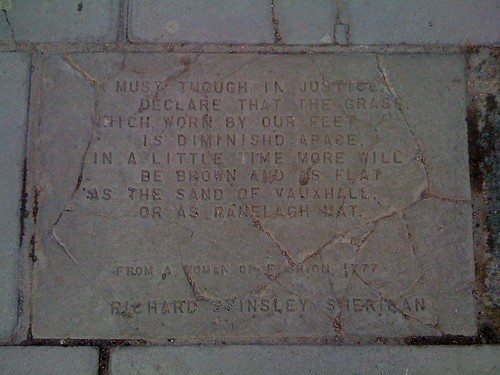 Must though in justice,
Declare that the grass,
Which worn by our feet,
Is diminish’d apace,
In a little time more will
Be brown and as flat
As the sand of Vauxhall,
Or as Ranelagh mat.

From A Woman of Fashion 1777
Richard Brinsley Sheridan 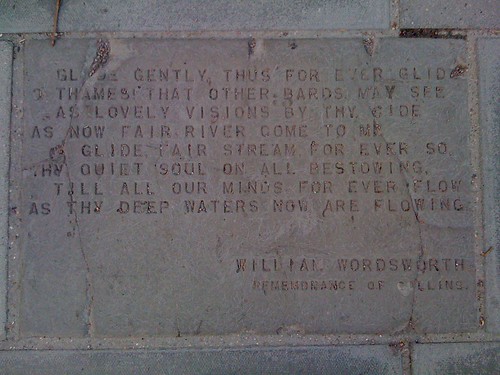 Glide gently, thus forever glide,
O Thames! That other bards may see
As lovely visions by thy side
As now, fair river! Come to me.
O, glide, fair stream! Forever so
Thy quiet soul on all bestowing,
Till all our minds forever flow
As thy deep waters now are flowing. 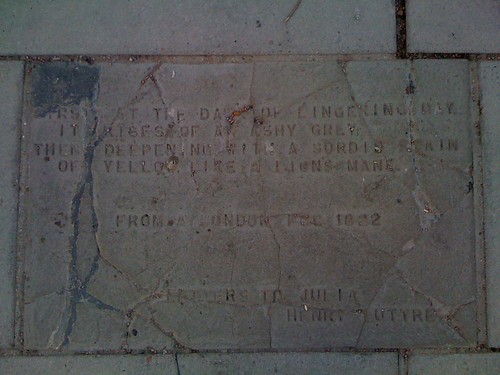 First, at the dawn of lingering day,
It rises of an ashy grey;
Then deepening with a sordid stain
Of yellow, like a lion’s mane.

From A London Fog 1822
Letters to Julia
Henry Luttrell 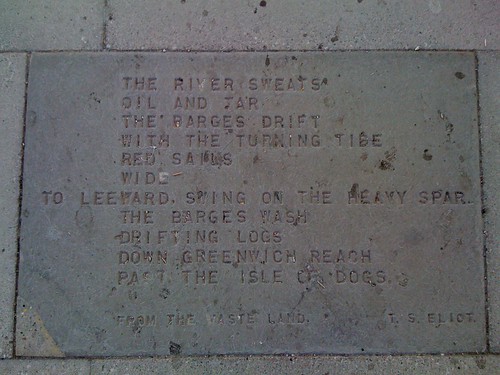 The river sweats
Oil and tar
The barges drift
With the turning tide
Red sails
Wide
To leeward, swing on the heavy spar.
The barges wash
Drifting logs
Down Greenwich reach
Past the Isle of Dogs.

Mary, just saw your post on Sparkly about the poetry slabs on the South Bank. They have been there since the early 80’s and I think there used to be more. The GLC (where I worked in the early 80’s) put them up I think as a step towards brightening up the South Bank which was a bit down at heel then. I often used to see them but had not realised they had survived.

LM got in touch by email to say,

I just happened across your blog post from march this year about the poem paving slabs along the south bank. The reason I was searching information about them was because me and my mum were walking down there recently, we spotted them and she remembered that her dad had been a part of the team at the GLC who chose the poems in the 80’s. He loved poems and would recite these off by heart – it was a real passion of his. I would love to find out if someone has a comprehensive list of the original poems that were put there, but as the post mentions, that information may be lost.
I would also like to thank you as we had only found 3 of the paving slabs, so its lovely to find the missing one! The TS Eliot was one of granddad’s favourites I am told, and that’s the one that was missing. Thank you in advance for any help! It really is amazing who you can find on the internet.

J J Fielding contacted me on Twitter to let me know about this:

Accompany Poetry Librarian Chris McCabe as he leads a tour exploring the centuries of poetic activity in this area of London.

…. including these pavement poems!

Details and booking available on the South Bank Centre website.