A much more cheerful week this week, boosted by last Saturday’s day out with the Ramblers my mood continuing to improve as I ticked off more of the minor To Dos Monday and Friday, had a good work-week in Manchester and met all the local folks I’d hoped to bump into again on Saturday. In addition, we seem to have survived Storm Ciara unscathed, had our first Sunday lunch at The Temple Bar Inn under its new management, and successfully undertook Operation Free Mouse…. read on.

Monday was a quiet day at 40A as P had one of his periodic migraines, so I pottered around – did last week’s week notes, wrote January’s diary entry in the Forty Acres Diary (vol 13), cleared the ash out of the log stove (it now burns much better as the air vents are allowed to do their magic).

Heading out to the small pond to photograph the cheery yellow winter aconites for last week’s blogpost, I discovered the first daffodils were out down by the train set. Although it feels amazingly early for daffs to be blooming, the Forty Acres February Flowers are fabulous. Dad, mum and Jean have spent a lot of time over the years spreading snowdrops and daffodils, and putting in lots of plants. It’s lovely. Over the course of this week, more daffs have come into flower (Jean reckons they’d be the wild ones – they are smaller than the ones you’d buy from a supermarket) and the winter aconites have spread up amongst the snowdrops. In the rose garden there’s a pink cyclamen, and, amazingly, two roses in bloom, one of which has been there since the start of January. We should be getting primroses soon – we spotted some out when we’ve been out and about this week.

I also spent a lot of time leaning out of my office window with my camera, trying to catch the red woodpecker that has started shy, swooping visits to the bird feeder. I eventually managed one successful albeit slightly blurry headed shot. In the meantime, it was a joy watching blue tits, coal tits and robins feasting away in the peanuts. So I videoed them.

I stretched my legs and got some fresh air with a walk down to Dore Abbey, where I spied what I think might have been a bat roosting high up in one of the arched windows.

In the afternoon, I dug out the sage green paint from the garage and painted over the polyfilla-ed patches in the kitchen, then settled down to finished off Tales of the Country and started The Immortal Life of Henrietta Lacks – an excellent popular science meets biography account of the short life Henrietta Lacks, outlived by her cervical cancer cells which have powered bio research worldwide since the 1950s

Tuesday featured another early morning drive to a station to catch the train for a Mary-work-week away; this week the combo was Abergavenny and Manchester. We are about half way between Abergavenny (AGV) and Hereford (HFD), and it’s a far easier drive to get to AGV station than it is HFD. AGV means no rush hour traffic jams and tail backs; no need to cross to the far side of the City/Town. It’s a beautiful route up along the Welsh Marches via Craven Arms and Shrewsbury. I was in MN to spend time with a new recruit in the KM team, training them up on the document automation platform we use. A hectic but productive trip. Nice staying in the Radisson, and blue, blue skies on Thursday.

Friday morning was spent doing jobs, which meant I didn’t venture out into Ewyas Harold to hook up with the walking group. Another time. Instead, Phil and I headed out in the car to tick off a whole list of Hereford tasks (as an aside, we still find it weird to think about doing shorter journeys by car). We filled up with petrol at the marvellous Lock’s Garage in Allensmore (after a slight delay while we tracked down the lever to open the petrol cap!), bought the week’s veg, and came away with a free lettuce, kohlrabi and artichoke (fab!); took the back roads to Rotherwas and M3 Auto to get our passenger side headlight bulb replaced (top notch service from the team there) then drove through Hereford to drop off two boxes of bric-a-brac at the St Michael’s Hospice Holmer Road warehouse/shop; bobbed into B&Q to buy steel wool, expanding foam, a door hook and a large back of rock salt; sought out a new duvet cover in Dunelm, but came away with a new 1 pt glass jug (Pancake Day ahoy); left our guest bed mattress topped at The Laundry Basket launderette at the Asda junction for a service wash; toured Tesco for a small weekly shop (having bought most of the fruit and veg at Allensmore). Then home for lunch!

I also spent an hour or so raking more fallen leaves and twigs out of the small pond and then raking up the last of the fallen willow tree’s leaves and long whiplike branch ends (they don’t really feel like “twigs”) and wheel barrowing them down to Mower Turn. Dad and Colin are planning to fix up a day to chainsaw up the trunk and remaining, larger branches. Final job of the day was to squirt the expanding foam into the broken bit of the garage room. I made a bit more of a mess than I meant to…..

Storm Ciara was scheduled to arrive overnight Saturday, staying throughout Sunday and petering out Monday. So, keen to make the most of the calm before the storm, on Saturday morning P and I set out for the Kerry’s Gate – Bacton – Abbey Dore walk – and met five people en route. The most sociable we’ve been (able to be) since we arrived. The Kerry’s Gate trio were accompanied by four lovely dogs too. We swopped numbers and suggested wine, getting an enthusiastic response. The blues had lifted last weekend, and this definitely banished them further away 🙂 So – big thumbs up for meeting people who live near by and are our age (ish).

On our return, we embarked on Operation Free Mouse. Background: we’ve been hearing the scamperings of mice in the roof since we got here and when I was in Manchester last week, Phil messaged to say he had encountered a mouse in the kitchen. And then on Friday morning Phil heard scratching in one of the speakers we’ve got plugged into the TV…. yup, the mouse had got in, but as we realised after a bit of shaking of the speakers and trying to lure it out with peanut butter, it couldn’t get out. URK!!!! Operation Free Mouse saw us put the speaker into the bath where Phil undid the speaker cover, and I stood by with a welly (excellent Whorton tip there) … caught the little fella / fella-ette and took s/he far, far away from the house to let s/he go!! We have stuffed steel wool into the gaps around the pipes under the sink which is where s/he appeared from but had a mere 24 hours mouse free…. Today [Monday], we found a shredded crisp packet in the bin under the sink – SIGH – which has prompted us to set the newly purchased electric shock mouse trap, chosen because you can empty the trap without looking at the Dead Thing. I’m too squeamish for snap traps.

Having mentally battened down the hatches on Saturday afternoon and evening (reading with the log stove on in the afternoon, audio conferencing in for the LED Trustees Meeting and watching the last of the first season of Succession – sooooo good! – with Pizza à la Phil – also sooooo good!), I got up in the middle of Saturday night / Sunday morning to take down the bird feeder on the still small pear tree and the willow’s wind chimes, and to check that the willow tree cuttings weren’t blowing out of the quarry/bonfire pit. All OK (or at least, it was at 4am). With the Amber Weather Warning, we were surprised to see the FloGas tanker materialise on Sunday morning, but glad to have the gas tank refilled. We’d got down to around 20%, having started the year at 50%.

We still managed to head out for Sunday lunch with dad and Jean, our first visit to The Temple Bar Inn under its new owners. Very friendly welcome from the extended Fulgoni family, and tasty food. After a massive lunch followed by coffee with dad and Jean back at base, Phil and I indulged in a lazy late afternoon / early evening reading by the log fire. The days are definitely getting longer – we only drew the curtains at 6 o’clock. The buzzards have been out more this week, and we’ve heard the mournful hoots of owls early evenings. 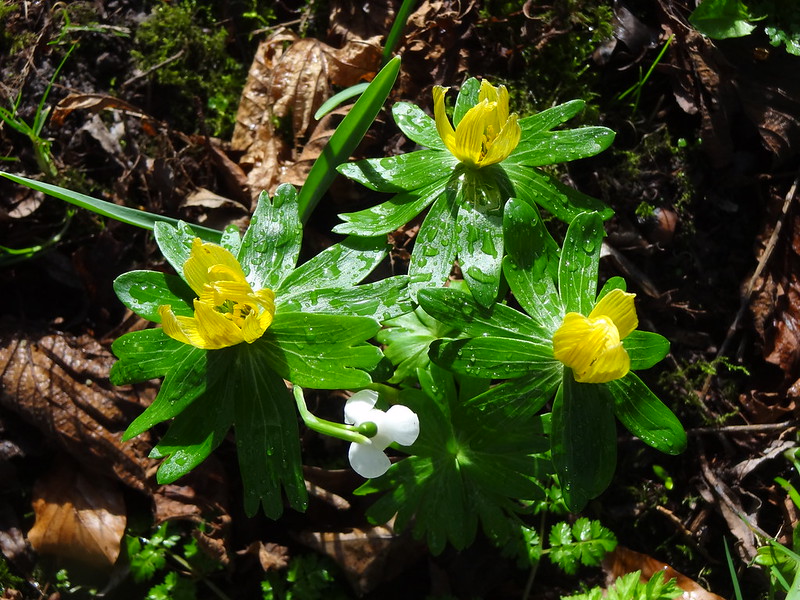