Back home, and preparing for all our stuff to arrive from London next week….

We’re also preparing to rent out Walton, so Tuesday morning I adapted the Government’s handy model shorthold assured tenancy agreement to reflect our needs. Main gripe is that the model document doesn’t use automatic cross referencing or an inbuilt table of contents. Makes me appreciate the KM team work product all the more.

Found time to do the Riverdale walk though. In the orchard there the apples are, almost literally, being hoovered up from between the rows of trees, and the sheep are grazing in the fields closer to Abbey Dore.

VWW and Family Zoom resumed, as did work. All fine. Almost caught up with the To Dos that had accumulated in my inbox over 2 and a bit weeks off.

The mornings are starting later, which means that I was treated to a couple of stunning sunrises over Grey Valley wreathed in mist.

Friday morning was admin – LED Fundraising Weekend updates, with Facebook thankfully playing ball, getting insurance quotes and putting post it notes on the things we want to give to charity so as to have house room for Barbican + Walton belongings.

I foresee an autumn of winnowing and charity shop donations.

Frustratingly the British Heart Foundation shop in Hereford looked like it was doing furniture etc collections, only for them to phone just at the end of the promised 3 working days to say “Oh, no, as you can imagine, our warehouse is full”. That I could easily imagine, and had assumed that as their website said they were able to collect from our postcode, they were one of the few places that did have more space.

So it was fingers crossed for St Michael’s Hospice, which came up trumps – they’re collecting 2 big bits of furniture next weekend, and on Monday we took a car load of crockery, kitchenware and bedding to their Donation Station warehouse on one of Ross-on-Wye’s industrial estates.

Our local Facebook buy/sell group has proved a winner too, with the double bed finding a new home over the weekend, and friends and extended family are also taking “stuff”.

I spent Friday afternoon and Saturday visiting Rachel and Carl. A lovely day and a half, and I’m getting better at the route too. Although still room for improvement: I realised half way there that I’d left the “Avoid Motorways” option on on the satnav and my return drive took the scenic route through the centre of Monmouth and back via the country lanes by way of Rockfield and Garway.

One day I’ll stop at Tintern to visit the abbey ruins and for a stroll through the village.

Sunday saw a cool morning turn into another late September scorcher. Phil and I did the Bacton square, hedgerows now glowing with berries (my photos don’t really do them justice), and got back just in time for Dad and Jean’s arrival for lunch followed by a tour of the Post Its so that they could take any things they would like to keep.

The sheep is settling in to her new home outdoors: 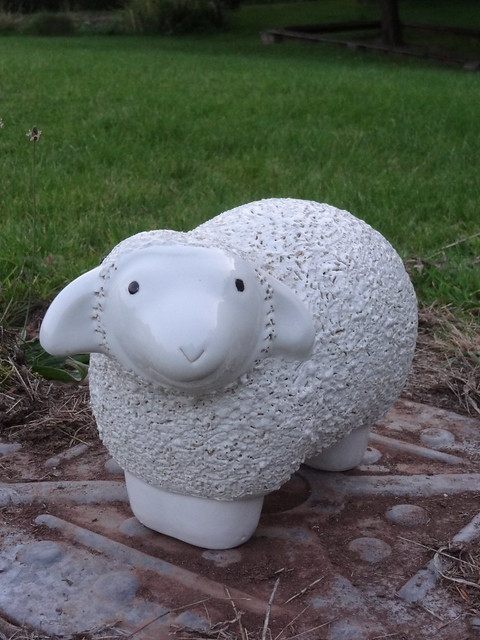 We also selected the spot in the orchard where the greenhouse will go – my birthday present from dad and Jean. Luckily the apple tree that’s in the perfect spot turns out to have a rotten trunk and roots. So that’s getting chopped down sometime before the greenhouse’s arrival.

And there was still enough time in the late afternoon / early evening for a lovely walk up to Kerry Gate and back along the river / Riverdale to Abbey Dore Court, picking blackberries.

Monday morning was spent packing “stuff” into boxes and then into the car.

After lunch, we took the first car load to the Hospice Donation Centre in Ross –  all very straightforward and efficient.

On to Hereford for an hour of admin, including a visit to the library to return my Walton reads and to pick up the next set of books I’d requested, including the last in Toby Clements’ Kingmaker/ Wars of the Roses quartet – very pleased to have got that at last.

Hereford was lovely in the hot September sun. The roads and the Old Town were quiet, and there was plenty of al fresco seating. Strange to think that the last time we were there together was pre-pandemic, and in the dark, cold and wet days of February and March. Ditto Ross on Wye.

Back home, a bit more sorting out, then time for a few more chapters of Where the Crawdads Sing sitting out on the front lawn. Early evening: lettuces watered, tomato plants trimmed, and blackberries picked from the hedges lining the sheep field opposite and speedily assembled into River Cottage Blackberry Whisky, as suggested by Sue. Now we just have to shake daily until the sugar dissolves, and wait 6 months…….

On the minus side, I think we’re both a bit stressed by this stage of “moving in” and all the COVID-19 uncertainty – no surprise with our shambling charlatan and his cowed-by-Cummings cronies “in charge”. Neither of us is sleeping well. The September influx of Daddy Long Legs doesn’t help either. Looking forward to this time next week, by when we should have Barbican stuff here and a long weekend of sorting out stuff behind us.

In the spaces between sorting out stuff, it is gorgeous being here.

TV: Undemanding crime – Prodigal Son (Mainly still watching because Michael Sheen is having so much fun. I’m sure there must have been a million outtakes where he succumbs to the Fffffff of Hannibal Lecter) and Strike: Lethal White. Plus Africa’s Great Civilisations, on Rachel’s recommendation. Frustrating that episodes 1 and 2 are no longer available for viewing.

Podcasts: Not so many – a few more History of England, the occasional Books and Authors.

And finally, for some further and other perspectives: