A good start to the final month of 2020. A glorious sunny Tuesday morning so I ignore my To Do List and headed out for a walk along the lanes, doing “Tremorithic backwards” aka Abbey Dore – Cwm Hill – Tremorithic Road – Bacton – Kerrys Gate. 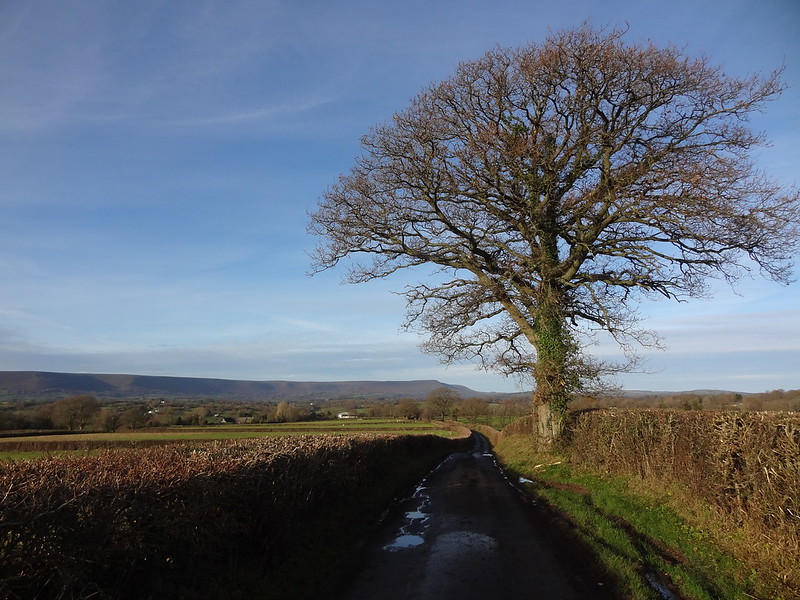 I did slightly regret that I hadn’t driven over to Longtown to do the Cat’s Back though….

Good week at work. Got a lot of small projects wrapped up or to the stage where they’re with someone else to do something, which at this time of year often drifts by mutual consent, into January.

Friday forecast had featured snow, but all we saw were a few light flurries in the afternoon, and the morning was lovely.

Friday morning also featured half an hour or so in the company of a stray collie that wandered past the kitchen window …. Phil had met his owners while he was out on a run and they were scouring the lanes looking for Sparky. Turns out they all live at the farm down the road, and that Sparky is an old fella – which explains why he was easy to catch and corral and seemed quite happy pottering around the lounge and kitchen giving everything the once over, and going nose-to-nose with his reflection in the mirror in the hall.

A nice way to meet some more of our neighbours.

After all that excitement Phil and I made a tactical trip into Hereford for library click & collect and then out to Rotherwas to the new Donation Station that St Michael’s Hospice have set up there. Perfect location, once you’ve navigated through the service roads of the Tom Head section of the Industrial Estate. There’s a lot more there than you see from the main Holme Lacy Road.

Then back into Hereford via Asda for a quick supermarket shop and General Dogsbody to restock on the bird feeder peanuts. The woodpecker wolfs them down. Then into town proper for an eye test (me), leather walking boot acquisition (Phil) and Christmas present pick ups. Leather walking boots are on my list too as the fields around here get muddy and wet in the winter and the grass can be long and wet all year round, so leather boots seem like a good option for dry feet for longer walks where wellies won’t quite do.

Back home via Dinedor and Lock’s Garage. Friday night pizza in the company of the log stove.

Saturday morning we mulled over the possibility of getting a Border Collie puppy from one of the farms in Abbey Dore – picking up on something the folks we’d met yesterday had mentioned. Tricky….. And eventually decided against it. Not the right time and probably not the right dog.

Did the Bacton Square and called in at Yew Tree for tea and the first mince pie of the festive season. Late lunch of leftover pizza and a lazy afternoon by the log stove.

Sunday saw the purchase of two “new” front tyres for the car and learned that they’d worn so much because the tracking is out. Not great timing.

Telly: The Good Lord Bird (still only rates an OK) and We Are Who We Are – we’re seeing a lot of Italy on the small screen this year.

There won’t be the usual weeknotes for the next couple of weeks.