With travel off limits for most of 2020, I can imagine that lots of people have been dreaming of Big Trips for 2021.

So, for those folks considering going trekking in Nepal – Everest Base Camp do I hear you say? – or similar for the first time, here are some of the key things I’ve learned about doing portered treks over the past 10 years.

Gain height gradually. The Annapurna Circuit was a good trek to start with – a gradual ascent allowing the body to acclimatise steadily. With the road building I’m not sure how much of our route remains road-free. Road walking is no fun with the the dust and fumes generated by local traffic, let alone the risk of a close encounter with a motorbike, bus or other vehicle as it careers along the rutted mud “road”.

You don’t need to be walking though. Even the day long bus ride from seaside Lima to Huaraz (3000 m) works on a similar basis. I still think gaining height by walking has to be better though.

Give yourself time, for your body to generate more red blood cells and to get past the jet lag. I’ve mistaken a jet lag headache for an altitude headache in the past and when they combine they’re extra nasty. Allow yourself a day or two of chilling out at the start of your trip, keeping sightseeing / trekking to a minimum then too, and you will enjoy the rest of the trip much more.

Flying in to Leh (3500m) after l-o-n-g overnight flights from London we spent the rest of the morning catching some shut eye and then relaxing in the garden before Pemba took us out on a short orientation tour of the bazaar.

We had plenty of time in Ladakh, which mean we could spend our first week in Ladakh sightseeing in and around Leh, including a half day walk around the city plus a scramble up to the prayer flag cairns above the Khardung La (5359m). As a result, everyone in our group sailed through the Markha valley trek and its two 5000m – or thereabouts – passes.

Start slow. On more than one occasion I’ve seen fit guys struggle with the need to give their body time to adjust. A Stop/Start approach to hiking at altitude doesn’t do you any good – and it’s not realistic to expect your body to behave the same at 3000m as it does at sea level, even if you are a marathon runner. Starting slower than you think you can go gives your body time to adjust to the reduced O2 and means you’ll be able to speed up sooner.

I take Diamox with me, but I’ve never needed to take it to acclimatise. I have taken it when a cold or stomach trouble has meant I’ve run out of steam sooner than I would have done had I been 100%. Both times it’s been on the advice of my trusted guide, and with a decade of trekking at altitude holidays behind me.

For headaches do hit, I take paracetamol (1000mg) as soon as poss. Once a headache sets in in earnest it is hard to get rid of. I’ll confess a complete ignorance of paracetamol vs ibuprofen vs aspirin when I started going to altitude. Now my rule of thumb is:

I’ve written a whole blogpost about my kit.

My top tip would be to take a pair of trekking poles (no point in limiting yourself to one). They are invaluable when descending steep slopes – dirt or snow – and in warding off overly enthusiastic guard dogs.

One thing I didn’t cover in that blogpost and which I get asked about a lot is what camera I use on trek.

For the past 10 years I’ve used a Sony Cyber-shot DSC-HX9V. I chose that model because it captures your GPS coordinates when you take a photo, which means my photos map themselves automatically on Flickr. I also wanted a camera that is small and easy to use and which comes with a good zoom plus the option to take panoramas.

The GPS feature has become less and less common in more recent models, and with my trusty 9V breaking last week I’ve just ordered the Sony Cyber-shot DSC-HX90V which came out in 2015.

If GPS isn’t a key feature for you, then a couple of other friends use and love the Panasonic Lumix DMC-TZ80.

On my 4 week treks, I take 5-6 spare batteries, fully charged and that usually keeps me going for the duration. To help retain their charge, my batteries and camera join me in my sleeping bag every night.

I sometimes pack my charging kit if a trek mate has a solar charger but we don’t always have time to charge and of course you do need some sun. You can often pay to recharge batteries and other electronics in lodges, but the price gets steeper the more remote you go.

The first two treks I went on were classic tea house treks in Nepal – Annapurna Circuit and Everest’s Three High Passes. The lodges were clean and well run with great food and we soon became adept at timing our arrival in the dining room / lounge for the 4pm lighting of the yak stoves.

But the bedrooms were unheated and at night it gets c-o-l-d…. And a room of cold air takes longer to warm up with body heat than a tent does.

So don’t be put off by the idea of camping in the Himalayas. All my treks since 2013 have been in tents. By and large the tents have been three person ones shared between two with plenty of room for a kit bag each and two sleeping bags plus thermarests.

Camping lets you venture further from the main trails and tweak your route as you go. And if camp does happen to be at a lodge, then you get to enjoy the food, company and stove there too.

Away from lodges, a dining tent has provided the place for meals and socialising and in small groups has doubled up as the kitchen too.

What about the bathroom? I hear you ask….

Tea houses etc will have loos and campsites will usually have toilet blocks. Both will be basic!

In the absence of local facilities, there has been a loo tent. And from personal experience toilet tent zips do have a tendency to jam. I have known fellow trekkers who have had to commando crawl out in an emergency… A trick I learned from Chhiring on our Dolpo trek is to rub a candle over the zip – that sorts out the dust that often causes the jams.

A bowl of washing water in the evening lets you get rid of most of the sweat, dirt and sun cream that accumulates during a day’s trekking. A small towelling glove flannel, a small piece of soap or shower gel – a complimentary bottle of the generic stuff you get in hotels usually does me for one trek (3-4weeks) – and I use a microfibre cloth as a towel – again as small as possible, you’re not going to be wearing it as a bath sheet, and the priority is having something that’s quick and easy to dry. If still damp (or frozen) in the morning, I fix the flannel and towel to my daypack with a couple of safety pins.

In the morning, a wet wipe wash starts the day. Biodegradeable wipes can be hard to come by, but you should make the effort given you’re likely going to bury or bin them once used.

I usually don’t bother to wash my hair while I’m on trek, but the metal bowls of warm water work for that too. You can pay to use the showers in tea houses too. Be warned that solar showers need some sun to heat the water…

Keeping warm at night hasn’t turned out to be a problem for me, but I know it can be for others.

I’m usually in bed by 8pm, and morning bed tea (and, on some treks, a bowl of warm washing water too) usually arrives sometime between 6.30am-8am depending on the day ahead, the weather and how shaded the camping spot is (sunny spots allow al fresco breakfasts as well as earlier starts). 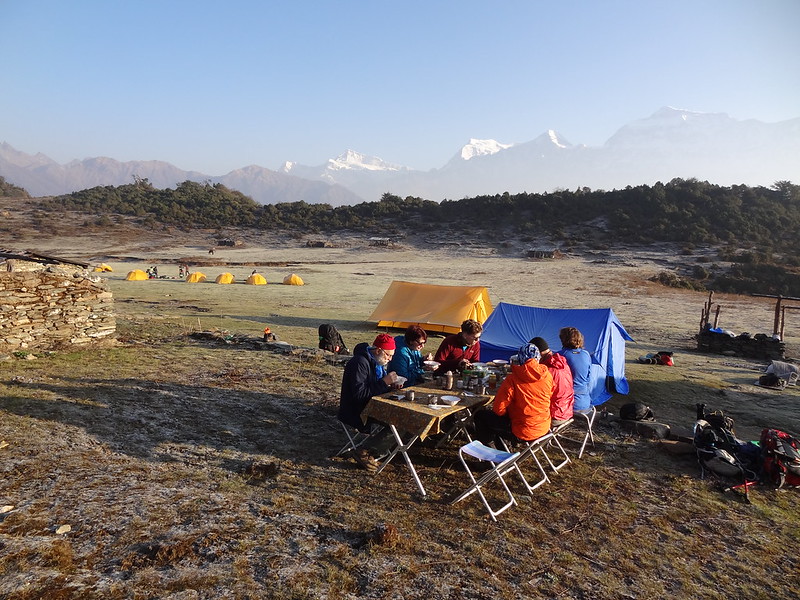 I’ve never found a pair of ear plugs which stay in my ears / work, but if I could then I would pack them every time. Night time disturbances have ranged from snoring tent mates to wind chimes to barking dogs to a 4am dawn chorus.  That said, I’ve slept through helicopter landings and the blood curdling death screams of a monkey being killed by a jaguar. So!

Being Sociable vs Personal Downtime

One of the things I enjoy about trekking is the afternoon / early evening downtime at camp when the group usually gathers in the tent or dining room for tea, biscuits and a bit of socialising.

In some groups Scrabble has dominated, but you need to make sure everyone is of a similar-ish standard or else it’s no fun. For mixed language groups, dice win out. Ten Thousand is the game of choice, with a side order of Yahtzee if someone can remember the list of things and their scores. Card games with easy rules, like Rummy, work too. 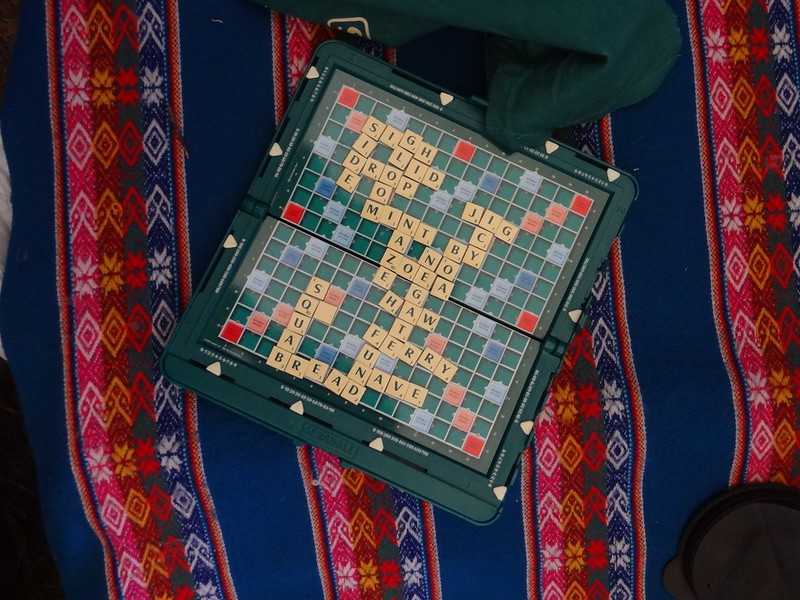 I’m a pretty sociable person but I need a bit of quiet time every now and then.

I’m a big reader, and I usually pack a book or two but I rarely read on trek (unless I’ve embarked on a complete page turner on the flight). Books are what I often leave behind in the hotel or when we have the chance to lighten the load for part of the trek. If you’re a Kindle convert, then that’s obviously a great way to carry a lot of reading at little weight. You’ll need to figure out when/how to recharge your device though.

Instead I’ll often settle into my sleeping bag and enjoy having the time to think back over the trek so far, or to plan ahead. I’ll often go on a Mind Ramble™ or two, letting my brain wander at will….

… which is how this blogpost originated.

If I’ve left any burning question(s) unanswered – and I’m sure I have – then feel free to email me.