Russia’s invasion of Ukraine is the backdrop to the whole week. Life continues here.

Tuesday morning, after a spot of admin, I headed over to dad and Jean’s to be on hand when the Herefordshire Reuse and Recycling team came round to collect their sofa bed. Glad it’s going to a good home and not to the tip, plus Jean and I had a coffee and chat too.

Work in the afternoon, Weds and Thurs as usual. Finished the week with a trip to Manchester in the diary for March.

Weather still unsettled. On Thursday lunchtime we sat in the conservatory soaking up the sun and watching hailstones bouncing off the patio.

Gorgeous day Friday so I drove over to Longtown and up the pot holed road to Little Black Hill for one of my favourite walks in the Black Mountains: the Cat’s Back – Hay Bluff – Olchon valley (8 ½ miles). Cold wind on top, cat ice on the puddles and some snow skeins in the shady spots. Fabulous.

On the way home I called in at Frameworks to pick up our bespoke OS map, now framed. It’s going in the kitchen.

Late lunch then pottered around the garden, clearing up storm debris (good kindling), planting the sweet pea seeds and making a start on clearing garage of left over tiles and waste in readiness for the Return of the Ride On Lawn Mower (aka The Countax).

I took the MX5 for a spin on Saturday morning, over to Preston on Wye for a 7 ½ mile circular walk with the Golden Valley Walking Club: Preston on Wye – Blakemere – Stockley Hill – Tyberton – Preston on Wye. Cloudier than yesterday, but a good route and a nice mug of tea in The Yew Tree pub at the end… although I did wish it could have been a pint of Butty Bach. 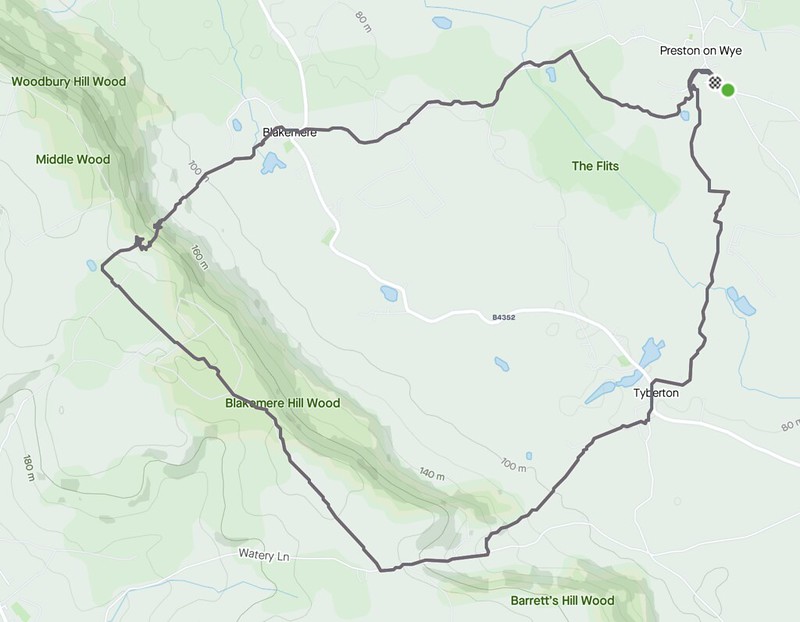 Back to base via Hereford Asda for petrol. Long queues – might be normal for a Saturday, especially with Tesco’s petrol out of action for a refurb, but could also be people filling up before the price goes up again given Russia-Ukraine.

Spent the afternoon snoozing / reading in the conservatory, and in the evening dad and Jean treated us to a lovely meal out at The Temple Bar Inn. We arrived in Ewyas Harold to find it full of parked cars, and the pub full of people wearing rugby shirts… all four of us oblivious to the England-Wales match.

Woke up feeling groggy on Sunday, having not slept well. I think I caught a chill up on the Cat’s Back on Friday plus my brain has been turning over work stuff the past few nights. So after lots of coffee Phil and I headed out to walk the Bacton Square, leaving under cloudy skies that cleared to sunshine by late morning.

We finished clearing out the garage of the skirting boards and lino liberated by / left over from the tiling project and I washed the MX5 and the old lino before another late lunch. Spent the rest of the afternoon in the conservatory again, reading Mary Renault’s Fire from Heaven aka Alexander the Great part 1) followed by a couple of episodes of Vigil before TV dinner with Phil.

I spent a drizzly Monday morning on computing/admin accompanied by the sound of gunfire from the Army camp waiting for the ride on mower which materialised at lunchtime. More computer-based admin in the afternoon as the rain set in. Tea time was time to light the log stove and to finish off Fire from Heaven, and then Vigil on the telly front.

In garden news, the daffodils are out and we’ve golden yellow crocuses joining the purple ones. The camellia is keeping most of its flowers in bud, waiting on warmer weather, as are most of the daffs. The bluebell leaves are up, but no flowers yet. The wild garlic dug up from Bacton verges last year has surfaced in its pot and Jean’s bulbs starting starting to push through in the long planter. First signs of leaves in some of the hedges.

On my office windowsill, there’s one lettuce seedling up. I’ve moved the tomato tray out into the greenhouse and used their windowsill space for the sweet peas. The three ginger rosemary cuttings Jean gave me on Tuesday are in a pot there too, together with the rosemary cuttings I took from one of Helen’s rosemary plants. Cat’s lemongrass is going great guns.

Podcasts: Books and Authors, History Extra, You Must Remember This, The History of England, In Our Time and Great Lives.