Between January 2008 and July 2013 I took photos of the redevelopment of the Barbican Estate‘s Milton Court site, as I passed by along Speed Highwalk on my way to work in CityPoint.

The photos are all housed in my Flickr set Milton Court Redevelopment – day by day.

The redevelopment saw the demolition of the low rise block containing local public service facilities ranging from a mortuary and fire station to the Weights & Measures office into The Heron (not to be confused with Heron Tower over on Bishopsgate), a deluxe 36 storey apartment block with a new concert hall, theatre, rehearsal rooms and studio for the Guildhall School of Music and Drama on the lower levels – the former paying for the latter. 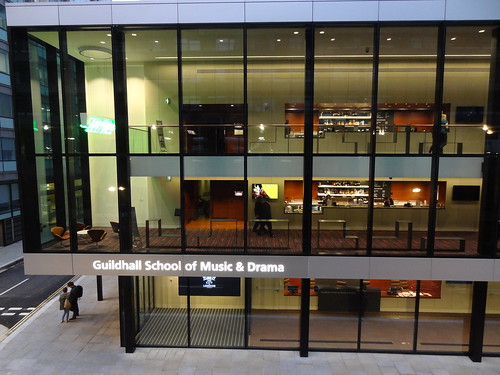 Starting on 03 January 2008 (IMG_6315) up to and including 14 May 2010 (IMG_7769), I took one photo most working days, using one of the trees down on Silk Street as my marker. Once Milton Court has been demolished, we get to see Ropemaker Place being built before The Heron gets underway.

From 08 November 2010 (IMG_0035) to 24 March 2011 (IMG_0509) I took three photos a day, adding in View 3 from further along the highwalk to capture a view of the construction site once the demolition was complete, and where the GSMD concert hall would eventually be.

On 28 March 2011 (IMG_0510) I decided to introduce a new shot (View 0), taken further back on Speed Highwalk to accommodate the ever ascending main lift shaft. It’s this view that really shows the impact of my upgrade from my Ixus to the Cyber-Shot.

Examples of the four views, plus a fifth showing the impact of the change in camera:

Over the course of the project’s four and a half years, the rest of my world moved on:

Initially I was planning to use the first photo (View 1 once I’d got View 0) from each day in my time lapse, but once I’d revisited my Flickr set, I realised that I would probably want to create four time lapses, showing all four perspectives.

I was somewhat prone, particularly after holidays, to forgetting the standard order. With almost 2000 photos, I decided that I wasn’t going to be able to check them individually. That said, as I worked through grouping my photos into views, it was easy to spot times when the patterns were interrupted, by the number of photos on any given date being more or less than the norm.

I also changed my approach to grouping the photos by View. Initially I put photos into folders, but when I got to March 2011 when I started taking 4 photos each day I decided to change to tagging – partly because I’d spotted quite a few days when the number of photos was > or < 4. Whichever way I did it, the basic process was the same: with the photos in full details view and ordered by Date Created, I have to cmd+click my way through the list selecting the photos that should be of the same view (based on my taking the photos in the same order each day), and then move into a new folder/tag.

Occasionally included other items, eg information notices, the removal of the highwalk bridge that used to cross Silk Street. I tagged these grey.

I ended up with 1922 photos tagged as follows:

Once I’d tagged all my photos I did a quick check using the “icon and text” view for each View (arranging by tag) – it was easy to spot abnormal photos and I tagged these red. Then, looking back at the full set I worked through dates where I had reds to fix. Often the issue was that I’d taken the photos in reverse order.

I then moved the photos into folders, to allow easy import into the time lapse tool:

I thought that compiling the time lapse would be the easy part – after all, I’d done it with Phil’s Warren Ellis Walton Beach ident, plus I’d got the SPS project page chock block full of useful tips and links. Starting with the link there to The Ultimate Guide to Time-Lapse Photography everything was looking fine until I got to Step #5: Start Making Your Movie – I don’t have Quicktime Pro.

But no problems, the guide suggests the alternative of assembling your movie with iMovie or another application – and as a Mac owner I have iMovie as standard, and a bit of Googling turned up How to Make Timelapse Video using iMovie – Time lapse on TheHowToMac’s YouTube channel. So I headed off to sort out my photos into the various ‘views’.

However, when it came to starting with iMovie it turned out that you need to import your photos into iPhoto. I don’t use iPhoto to manage my photos, I’ve simply got them in the Picture directory on my mac, organised by year then event, with folder names starting YYYYMMDD so that they list chronologically (my daily photo projects are the exception – these I put into a folder named YYYY Project so that the photos are grouped together, and the folder sits at the top of the parent year folder). I tried using iPhoto when I first got my mac, but it was just so slow I abandoned it. Plus I didn’t like not knowing where my original photos were and that I wasn’t editing them.

So, iMovie was out.

A trawl through my Applications folder didn’t throw up anything to use (ie the “thing” I’d used to make the Warren Ellis time lapse), but more Googling brought up a few possibilities:

So racking my brains over how I’d done the Warren Ellis time lapse, I felt sure I’d used QuickTime – and QuickTime Pro came up high in my Google search results, plus it was the first option mentioned in the The Ultimate Guide….. But, again, that’s paid for software that I don’t have. I took a look at QuickTime Player, which I do have, but although I can make a movie, audio or screencast recording, there’s no obvious ‘import photos for time lapse’ option. More focused Googling for time lapse quicktime player turned up a www.mactalk.com.au tutorial on How-To: Put Together A Time-lapse Video With QuickTime On Your Mac, which contained this very useful tip:

Result! … except it turns out the Open Image Sequence starting point is Pro only. Grrr.

So, back to Google, this time searching creating time lapse using “date created” which returned [Mac OS X] Zeitraffer lets you make time lapse movies from image files. Reading the review carefully seemed to indicate that I could organise my photo sequence based on date rather than file name, so I downloaded Zeitraffer from the App Store. It crashed my mac.

So I gave in and imported my photos into iPhoto 9 and used iMovie 9, following the instructions in this YouTube video on How to make a Time Lapse Video in iMovie 09 using Pictures from GoProFanatics.com, having first watched the Welcome to iPhoto native demo video which explained how to import photos into iPhoto, group them by events and do editing – primarily rotating views 0, 1 and 2.

I wish I’d opted for iPhoto and iMovie sooner – everything Just Worked. It was so easy, I even still had enough ooomph to add an opening and closing slide to each video.

For next year’s Creative Project, perhaps (perhaps) I’ll edit one of the time lapse videos to add in stills for key events in my life and travels over the same period.