Another backfill entry. This one is 12 years late and covers the fortnight that Hazel and I spent over Christmas 2002 on Intrepid’s Heart of Cambodia tour, preceded by a couple of days acclimatising in Bangkok.

The detail comes from the photos in my Intrepid Cambodia, December 2002 album on Flickr and my emails-home-turned-blog-posts.

Reading back over the blog posts, it’s strange to think that I took print photos as well as digital. It must have been the last time I did. I would dig out the album to check dates/details and to scan / add some photos to fill the gaps…. except that my photo albums are on the book shelf that’s stuck behind the piano.

I’m also struggling to remember when we actually started the trip and what we did over the first few days. We flew out to Asia a few days before the Intrepid trip started on the Saturday – Pip sorted out the flights and recommended the Bangkok hotel. I think we only had a full day in Bangkok before flying on to Phnom Penh and we had a full day there before Intrepid Day 1. I do remember we stayed at the Asia Hotel in Bangkok, and I’ve photos from Wat Arun. In Phnom Penh we had two nights (I think) in cheap hotel room with a bizarrely low ceiling staircase before migrating to the Puncak Hotel which was Intrepid’s base in PP.

So allowing for flights/arrivals/departures, this is what I think we did (28 June 2014 – updated with a few corrections at both ends of the trip, now I’ve flicked through Hazel’s photo albums which included her copy of the itinerary!):

Flying Lufthansa, staying at the Asia Hotel once we got to BKK.

A day spent pottering around Bangkok, including Wat Arun which was the main temple we’d missed on “The World Tour”, and using the new (to us) Skytrain to cross the Chao Phraya (แม่น้ำเจ้าพระยา).

A very, very early start to the day (necessitating top tier poker strength haggling skills with the hotel taxi drivers) to get to the airport for the Bangkok Airlines morning flight to Phnom Penh.

The hotel recommended in our guide book was no more, so we resorted to our taxi driver’s recommendation and wound up in a central location although our basic room came with the aforementioned low ceilinged staircase.

Sightseeing included the Royal Palace (ព្រះបរមរាជវាំងចតុមុខសិរីមង្គល) and the Silver Pagoda, Wat Phnom (វត្តភ្នំ) and its floral clock, the Central Market and the Russian Market where we bumped into Miss Universe, as you do….

More sightseeing including the National Museum of Cambodia (សារមន្ទីរជាតិ) and the Independence Monument (វិមានឯករាជ្យ).

Day 1 of the Intrepid tour – so we made our way to the joining point, the Puncak Hotel, dumped our bags and headed out to do more sightseeing – this time heading into expat territory in search of coffee at the Java Cafe & Gallery, and passing the Independence Monument (វិមានឯករាជ្យ) en route.

After a spot of people watching and mobile phone contract reading on Sisowath Quay, we returned to the hotel for the meet-the-group-and-admin session at 6 pm then Steve led us out for a lovely dinner on a first floor open air restaurant overlooking Sisowath Quay and the meeting of the Mekong and the Tonlé Sap River. 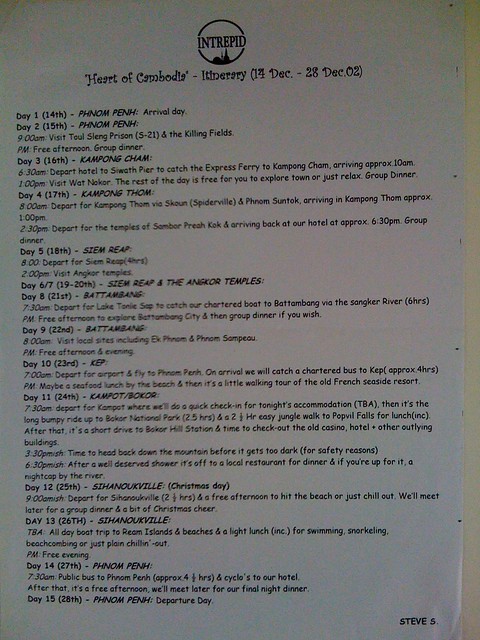 First day of the trip proper, and we spent a sombre, scene setting morning visiting the Tuol Sleng (សារមន្ទីរឧក្រិដ្ឋកម្មប្រល័យពូជសាសន៍ទួលស្លែង) torture centre and the ‘killing fields’ of Choeung Ek (ជើងឯក) with its stupa of skulls.

In the afternoon, we had free time to explore Phnom Penh some more. We may have saved the Royal Palace (ព្រះបរមរាជវាំងចតុមុខសិរីមង្គល) and the Silver Pagoda until today….

A morning express boating along the Mighty Mekong took us from Phnom Penh to Kampong Cham and the afternoon was spent riding pillion on motorbikes visiting local villages and riverside temples. And getting covered in red dust.

Leaving the river, we took the red rutted road to Kampong Thom, stopping en route at Skoun (famed for its fried spider snacks) followed by Phom Suntok where we climbed 956 steps to the temple at the top – great views over the surrounding countryside and lots of reclining Buddhas.

From Kampong Thom we did an afternoon trip to the pre-Ankor city of Sambor Prey Kok: brick towers in a forest setting.

We spent the morning on a bumpy bus ride from our overnight stop at Kampong Thom and the afternoon at Angkor Thom – part of the UNESCO World Heritage Site of Angkor. Starting at the Entry Gate and Moat, moving on to the Terrace of the Leper King (ព្រះលានស្តេចគំលង់) and the Terrace of the Elephants (ព្រះលានជល់ដំរី) then Prasat Suor Prat (ប្រាសាទសួព្រ័ត) and finishing with the beautiful beatific faces at Bayon (ប្រាសាទបាយ័ន) bathed in the lovely late afternoon light. 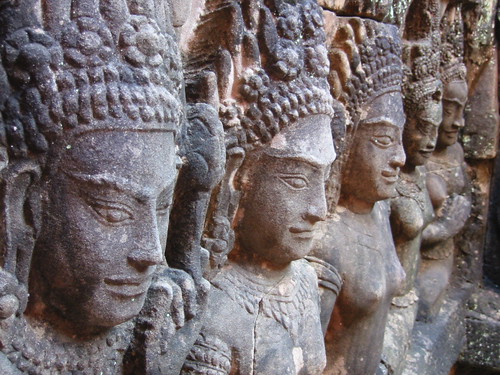 Onwards to nearby Siem Reap and an evening meal al fresco. 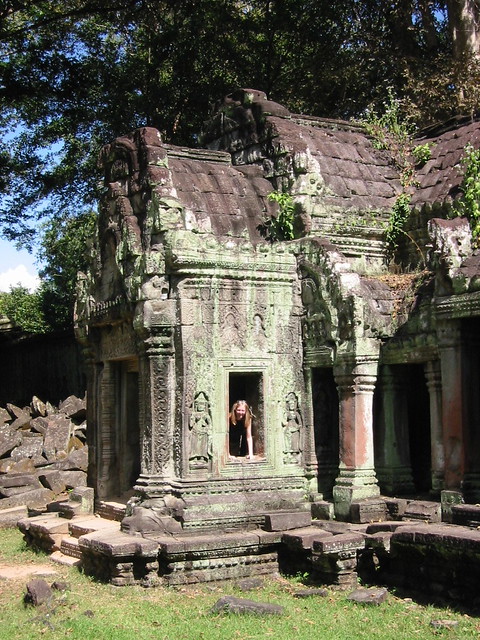 A half day back at Angkor, with an early start to watch the sun rise over Angkor Wat itself – well, that was the plan but setting my watch alarm for pm rather than am meant we missed sunrise departure…. Our sleepyhead slackers version caught up with the others in a café next to the main site for breakfast. Luckily we all had plenty of time to explore before heading back to Siem Ream via the Land Mine Museum. 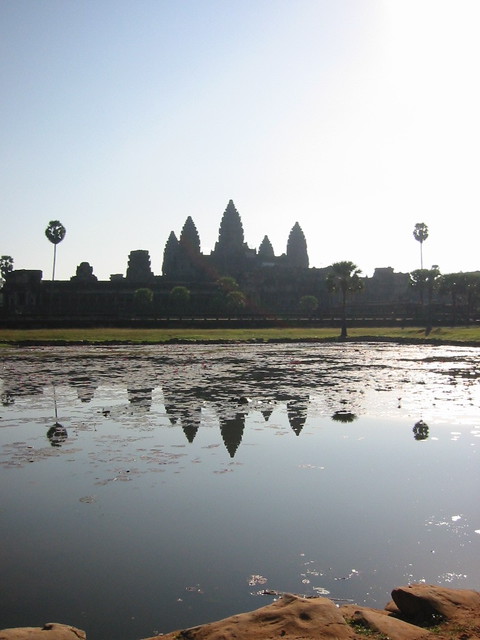 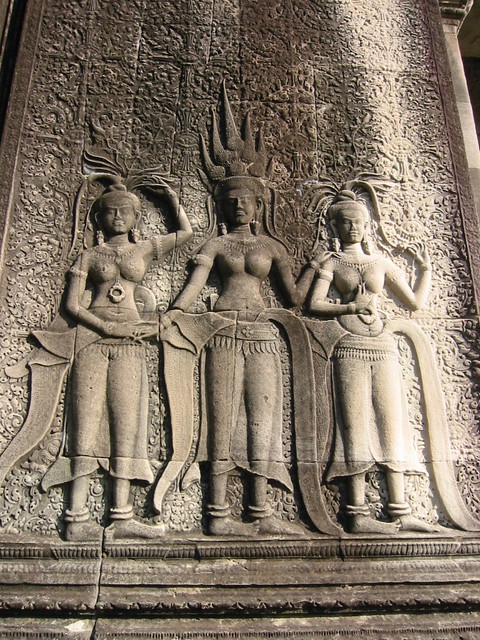 With a free DIY afternoon, H and I booked ourselves an hour with the blind masseurs at Seeing Hands for a Japanese massage, pottered around the market (buying my $7 red and black, 40l (?), North Face rucksack, which is still going strong) and rounded off the day by dining out on thalis in Little India.

Exploring around Battambang by boat, bike and bamboo train (aka Norry (ណូរី)), with birthday cake and beers for Hazel in the evening.

A morning flight back south to Phnom Penh with President Airlines, then a minibus to / through Kampot Province (ខេត្តកំពត) and the forgotten seaside resort of Kep on the coast.

A short drive to Kampot, where we checked into our hotel before driving up to Bokor National Park (aka Preah Monivong National Park) for our jungle walk up to Bokor, an old French hill resort with the ruins of a casino and King Sihanouk’s summer palace. A cloudy day obscured the views out over Cambodia’s southern coastline.

Back to Kampot for the night.

We started the day with Christmas Carols outside our hotel in Kampot before driving on to Sihanoukville and the legendary “drinking the bar dry” Christmas Celebrations at the Mari-Yan. 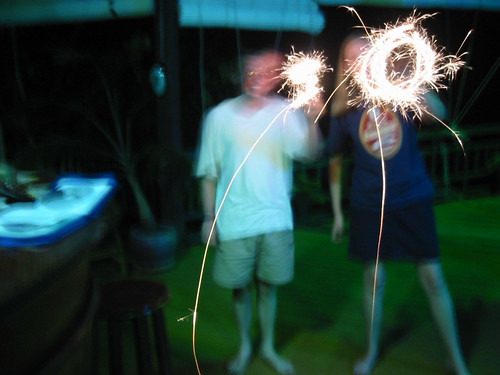 Christmas Celebrations at the Mari-Yan, Sihanoukville

Rest, recuperation and a very, very gradual recovery. Possibly a bit of beach time. Laundry. Dinner in the town, transported there and back by moto and/or cyclo.

Steve dipped into the emergency kitty to fund a minibus back to Phnom Penh on the basis that we were all possibly still too ill to travel… but we revived enough by nightfall to enjoy a final farewell drink at the Foreign Correspondents’ Club, Cambodia / Phnom Penh branch.

Over the course of the afternoon, ad hoc meetings with young men to negotiate moto hire for three (me, Hazel and Phil) for tomorrow’s trip to Phnom Oudong.

Lots of fun – sitting on the back of motos, whizzing along the main road through flat, green countryside to Phnom Oudong, and then climbing up the inevitable steps to explore the royal tombs and temples at the top – and getting more amazing views.

A final meal al fresco in Phnom Penh, with a dwindling group of Intrepid explorers as people had departed for home or their next adventure throughout the day.

And then there were two.

The end of the trip.

Twenty four hours after taxiing from Phnom Penh airport, Hazel and I landed in rainy LHR after an unimpressive series of flights with Lufthansa. Won’t be flying with them again.

Intrepid don’t run a “Heart of Cambodia” trip any more – it looks like it’s morphed into their Best of Cambodia tour.