Just back from a weekend in West Wales for the fifth biannual Everest Trek Reunion (photos on Flickr). A fab weekend with Hazel, Steffi, Dave and Jake featuring walking, eating and drinking and a stunningly sunny Saturday. I have returned with very sunburned arms.

Our usual Friday rendezvous routine worked smoothly – Hazel and I met at Paddington for the 3.45pm train to Swansea (4 bottles of wine made for a heavy daypack), Dave met us at Newport and we headed West coping with rain clouds and congestion (car crash x2 on the east bound carriageway) en route – but BBC Weather promised buckets of sunshine on Saturday.

Steffi’s Friday night curries were as much appreciated as ever although alcohol consumption was abstemious compared to last October. Jake arrived at 9.30pm and it was almost midnight before we settled into Steffi’s caravan. Too dark to see the changes to Newgale Beach wrought by the winter storms – the sand scoured down to reveal the remains of a petrified forest and the beach strewn with stones and rocks.

After tea and toast early on Saturday morning Jake-the-taxi drove us to St Davids (Tyddewi) where we caught the Strumble Shuttle Coastal Bus Service on to Porthgain, the Steffi plan being to pick up where we’d left off last time and to continue on along the Pembrokeshire Coastal Path (Llwybr Arfordir Sir Benfro) to St Davids. To make a full day of it, Steffi suggested taking in the whole headland between Whitesands Bay (Traeth Porth Mawr) and Caerfai Bay – a stretch we’d covered in our first reunion two years ago but in the opposite direction this time. And we promised Hazel that we wouldn’t be walking the final stretch from Solva to the ‘van. 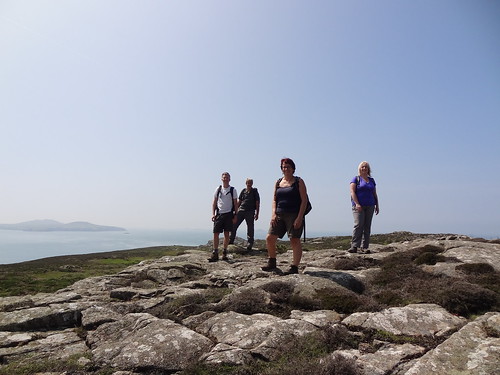 Heading off after lunch on St Davids Head

After an overcast start, the skies had cleared to a cloudless blue and the gorgeous afternoon light lasted just long enough to entice us to dine al fresco at The Harbour Inn in Solva (Solfach). Then back to the caravan to say farewell to Jake and a supper of Deer Flask tea and Dave’s fruit cake, white wine and cheese….

Sunday started slowly, with stiff joints and sore feet for some after yesterday’s 20 mile marathon. After a leisurely breakfast we managed the short stroll to the beach and back before Dave took us back to Martletwy for one of Maurice’s marvellous Sunday lunches. 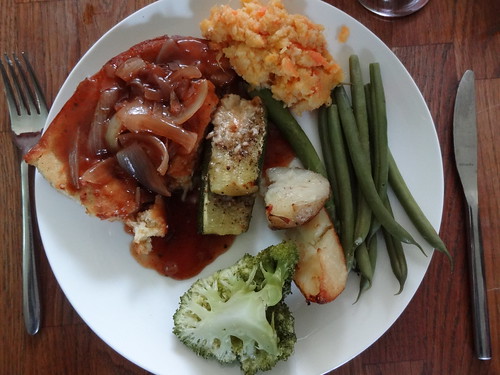 Sunday lunch: toad in the hole never fails to please