Trip No. 3 to the Peruvian Andes with Val Pitkethly, and definitely the toughest so far: ten nights over 4000m, seven valleys, three passes over 5000m, and a peak: Urus / Yanarahu, at 5495m. A lot of up and down, two stretches with daypacks plus portered kit only, and several stints in harness and helmet, rope, crampons and ice axe.

The trek / traverse was made harder by a flu-type bug/virus that we all picked up, which meant I had my first proper experience of altitude sickness – as we prepared to cross the first snow covered pass at ~5300m and I tried to put on Barney’s crampons (size 11, blue straps) and only realised that they weren’t mine when I started to do up the straps… Definitely out of it. Exhausted too, coming down from that pass, and it meant I didn’t do Ishinca, the first of our main peaks. Barney and Claus summited that on their own, but sadly sans camera.

We finished off the trip with a couple of days rock climbing and exploring the Wari caves at Hatun Machay – very luckily avoiding the downpours that were by then covering the Blanca in snow and rain. We’d spent a couple of acclimatisation days at the Lazy Dog Inn before starting our trek and had hail there… so very lucky having good weather for the 11 days of our Cordillera Blanca Traverse.

Here’s what we did:

Monday 29 June 2015: London to Lima via Amsterdam, with KLM. Overnight at the Faraona Grand Hotel, Miraflores.
Tuesday 30 June 2015: Cruz del Sur bus from Lima to Huaraz (3052m). Dinner at El Rinconcito Minero, with Brian & Mia, Jim & Donna – four Canadians who’d just completed the Alpamayo Circuit with Val. Overnight at the Hotel Colomba.
Wednesday 1 July 2015: Acclimatisation day 1, Huaraz (3052m): Out and about in town, with a taxi ride with Ebel up to the cross and Mirador at Rataquenua for sunset over the Blanca. Dinner at Bistro de los Andes, overnight at the Hotel Colomba.
Thursday 2 July 2015: Acclimatisation day 2, Huaraz (3052m): Cordillera Negra descent, from Shecta back to Huaraz. Dinner at Creperie Patrick (with the complimentary Pisco Sour), overnight at the Hotel Colomba.
Friday 3 July 2015: Acclimatisation day 3: Taxi to The Lazy Dog Inn (3650m) and hike up to the Parque Nacional Huascarán sign at 3965m. Lunch and knitted souvenirs at Cafe Yurac Yacu. Dinner and overnight at The Lazy Dog Inn – in the teepee!
Saturday 4 July 2015: Acclimatisation day 4: Day hike up to Quebrada Achiqua ( Q. “Ahuac” on the map) and “just round the corner” (and up!!) to 4600m. Dinner and overnight at The Lazy Dog Inn, night 2 in the teepee. Hail and a headache.
Sunday 5 July 2015: The Lazy Dog Inn (3650m) to Cruz Cayesh / Quilcayhuanca (4060m), by minibus to the entrance to the Parque Nacional Huascarán at Pitec, then on foot along the Quebrada Quilcayhuanca. Donkeys, Melky and Claus following, after lengthy negotiations over the increased village payment at the gate. Acclimatisation walk up the Inca lookout hill at the junction of Quebradas Cayesh and Quilcayhuanca.
Monday 6 July 2015: Cruz Cayesh / Quilcayhuanca (4060m) to Cayesh Base Camp (4400m). Afternoon hike up the glacial moraine to see the peaks, the glacier and the mineral lakes – and to acclimatise and to practice walking up/across scree (still not my strong point, it turns out).
Tuesday 7 July 2015: Cayesh Base Camp (4400m) to Pampa Tullpacocha (4270m): Morning hike up to the Punta Villon / Maparaju Glacier (5000m), afternoon stroll back down the Quebrada Cayesh and further up the Quebrada Quilcayhuanca to our camp at Pampa Tullpacocha.
Wednesday 8 July 2015: Pampa Tullpacocha (4270m) to Cuchilla Pampa camp (4572m): Morning walk up to Laguna Tullpacocha (4395m) – glacial blue with Tullparahu backdrop, then zig zag up along an old Inca route to Cuchilla Pampa, and a stroll to Laguna Cuchillacocha (4695m) before a late lunch back at camp. Traverse prep and packing in the afternoon, and meeting Freddy and Beto, our porters.
Thursday 9 July 2015: Cuchilla Pampa camp (4572m) over the Cho Cho Pass (5100m) and down-down-down to our Quebrada Cojup Camp (4387m)
Friday 10 July 2015: Quebrada Cojup Camp (4387m) to Ishinca High Camp (5082m). A lot of up, a lot of bush bashing, rewarded with hidden lakes and stunning views of Pukaranra and Pallqarahu massifs – and “our” lake, deserted but for nesting water birds.
Saturday 11 July 2015: Ishinca High Camp (5082m) over the Ishinca / Ranrapalca Col (5380m) and down to Ishinca Base Camp (4385m). Soroche for me, Nevado Ishinca summit (5530m) for Barney and Claus.
Sunday 12 July 2015: Ishinca Base Camp (4385m): Rest day with a walk to Laguna Milluacocha and its cairns, and Nevado Tocllaraju / Tuqllarahu (6032m) backdrop. Afternoon scrabble and coffee in Refugio Ishinca.
Monday 13 July 2015: Ishinca Base Camp (4385m): Nevado Urus Este summit (5423m). A slog, especially the descent.
Tuesday 14 July 2015: Ishinca Base Camp (4385m) over the Aquillpo / Akilpo Pass (5062m) and down into the Quebrada Aquillpo (4220m) for our last night’s camping on the Traverse.
Wednesday 15 July 2015: Quebrada Aquillpo (4220m) to the roadhead and Inca ruins at Honco Pampa (3515m). Back to Huaraz (3052m) for a shower, thank you / farewell / birthday beers and birthday dinner at Bistro de los Andes, complete with chocolate cake and sparkler. Overnight at Hotel Colomba.
Thursday 16 July 2015: Huaraz (3052m) to Hatun Machay (4290m) by taxi with Val and Melky for an afternoon of Wari caves and rock climbing.
Friday 17 July 2015: Hatun Machay (4290m) to Huaraz (3052m): a morning’s rock climbing, then a rainy ride back to Huaraz for beers bought by Barney at the Café Andino followed by a final slap up meal in El Rinconcito Minero and our last night at the Hotel Colomba.
Saturday 18 July 2015: Huaraz (3052m) to Lima via Cruz del Sur. Overnight at the Faraona Grand Hotel, Miraflores.
Sunday 19 July 2015: Morning in Miraflores – once again coinciding with El Corso de Wong, so an early transfer to the airport for our overnight flight to Amsterdam with KLM.
Monday 20 July 2015: Final hop back across the channel to London – Heathrow and City respectively. With our rucksacks doing the reverse.

I’ll be adding photos to Flickr as usual (Peru, June/July 2015), but in the meantime here are some highlights: 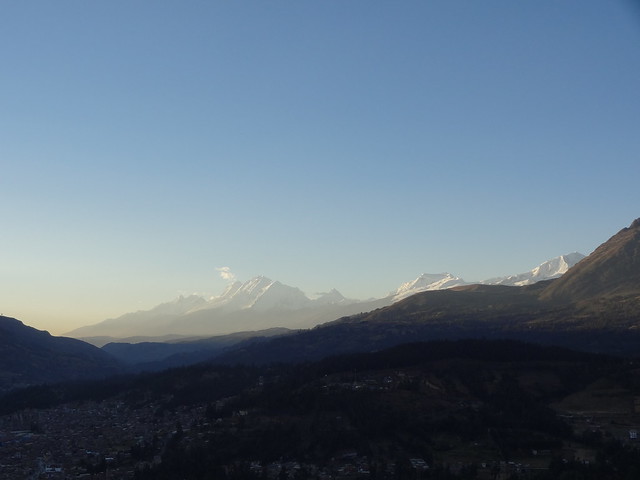 The Blanca and Huaraz in the late afternoon light © Mary Loosemore 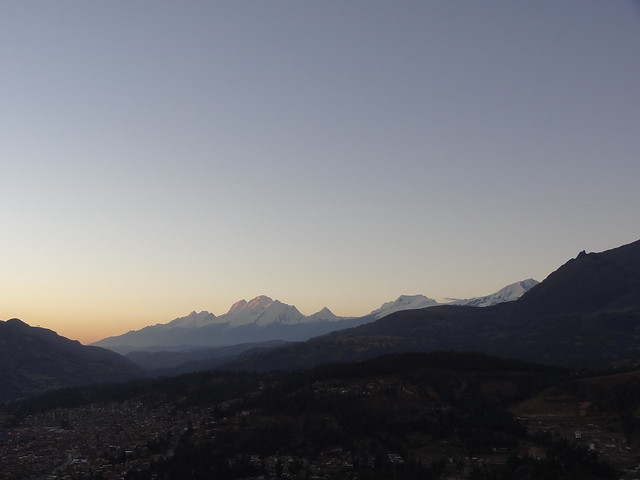 The Blanca and Huaraz in the early evening light © Mary Loosemore 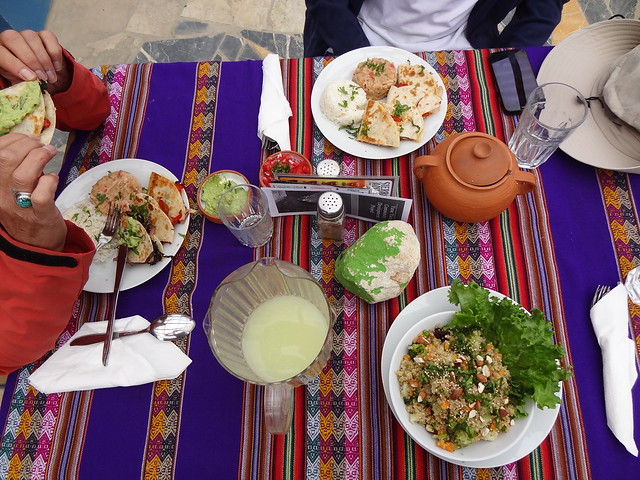 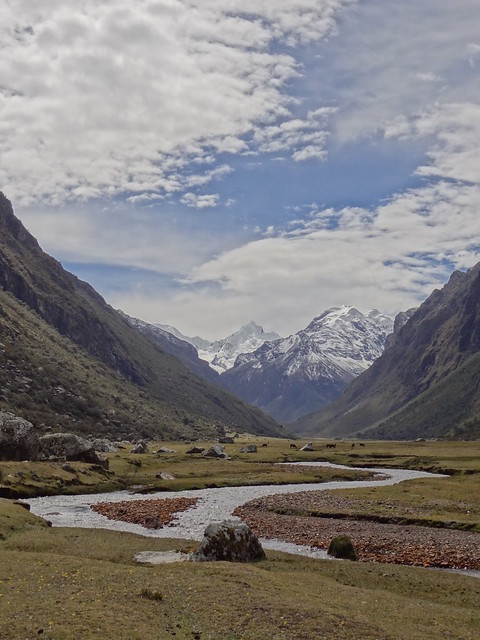 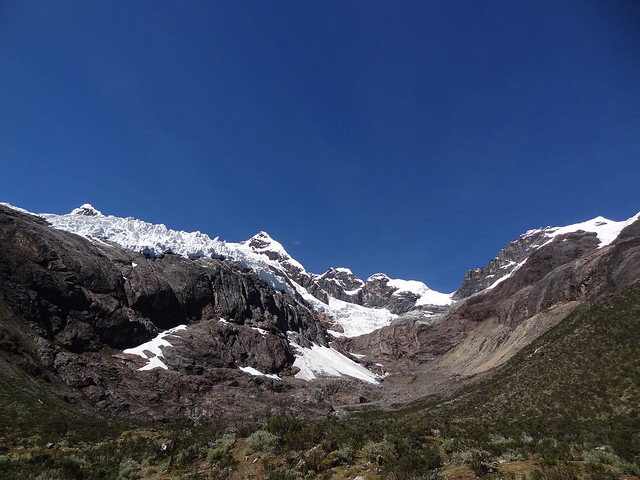 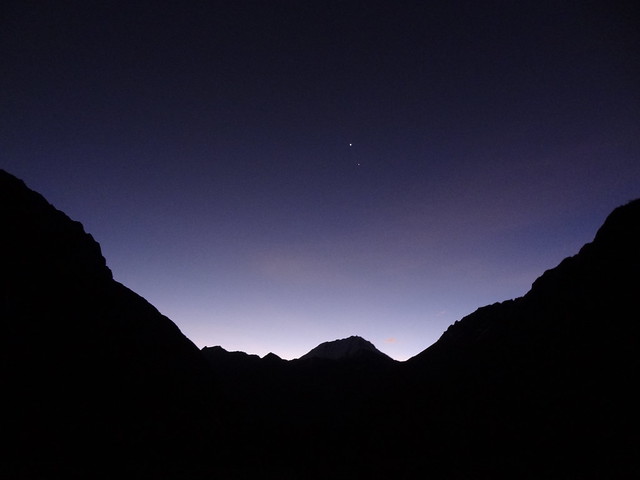 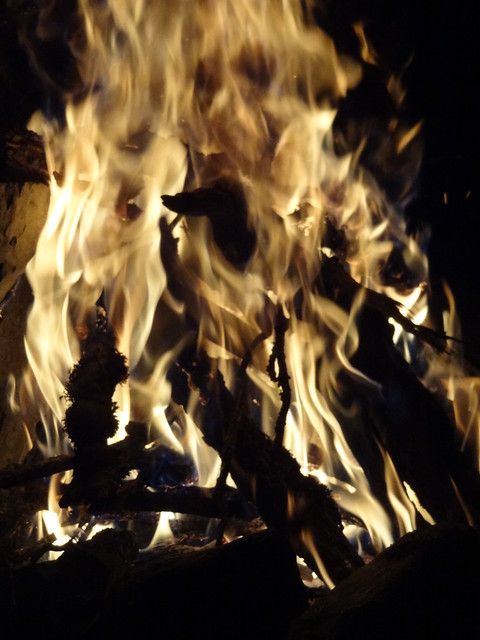 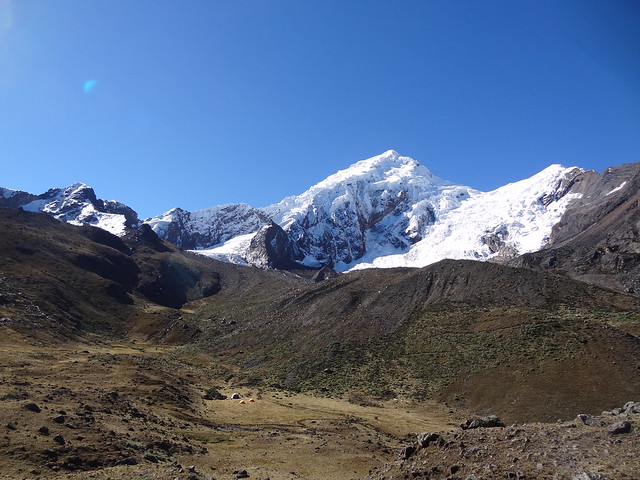 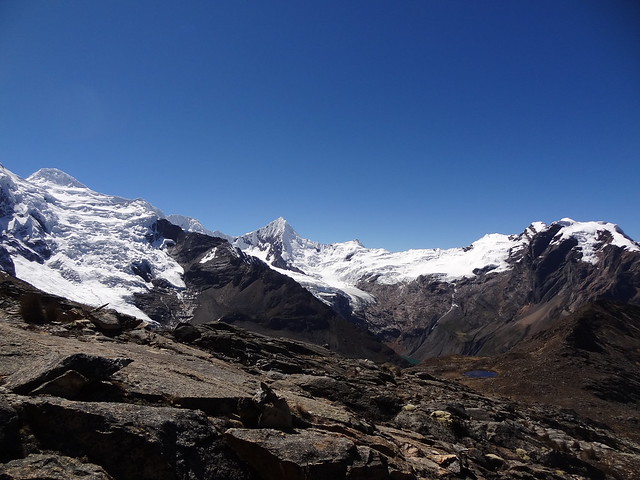 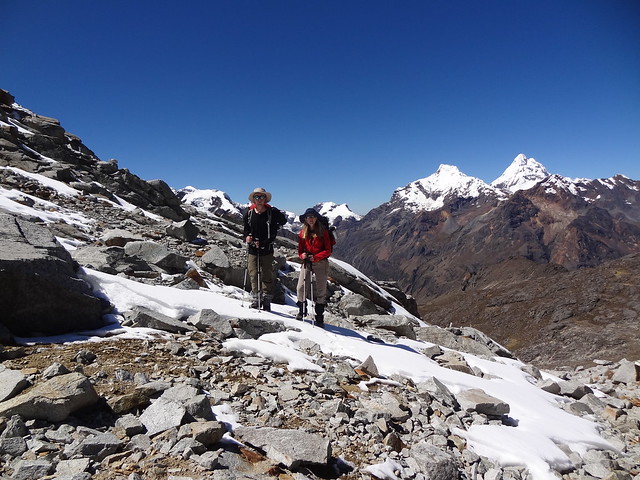 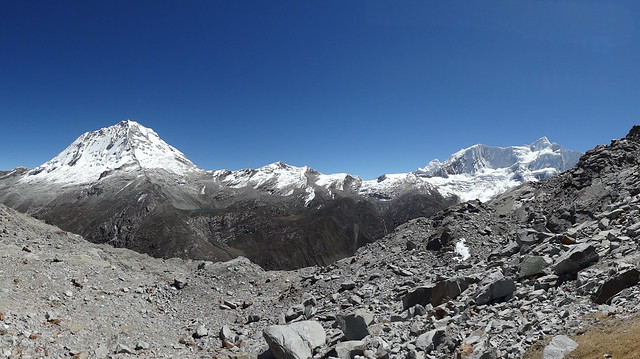 Ranrapallca and Ishinca, from the Cho Cho Pass © Mary Loosemore 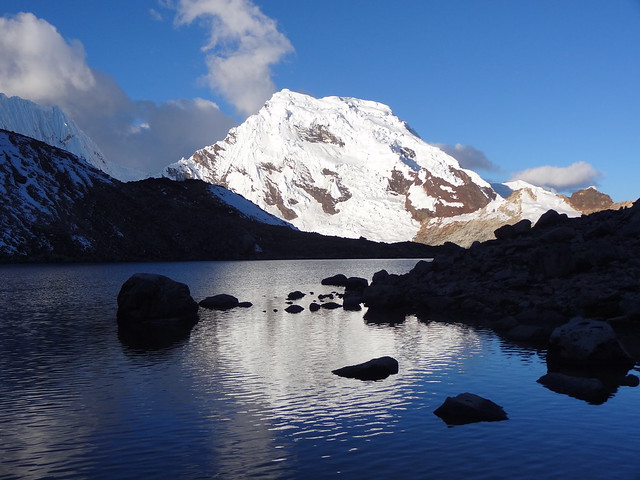 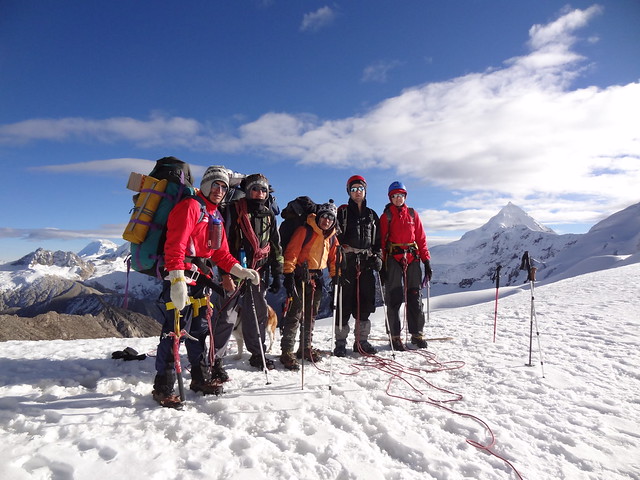 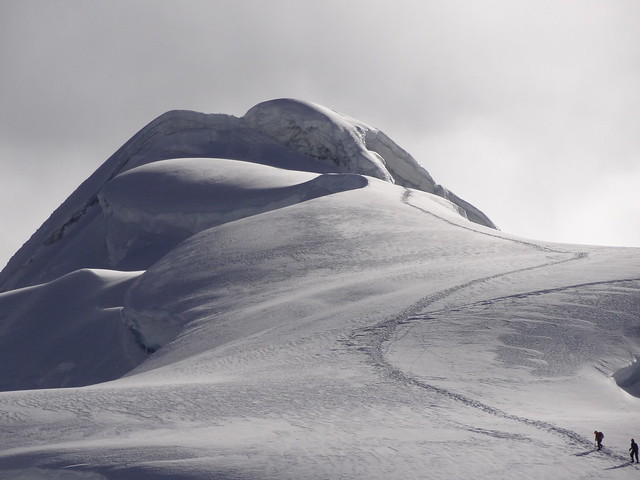 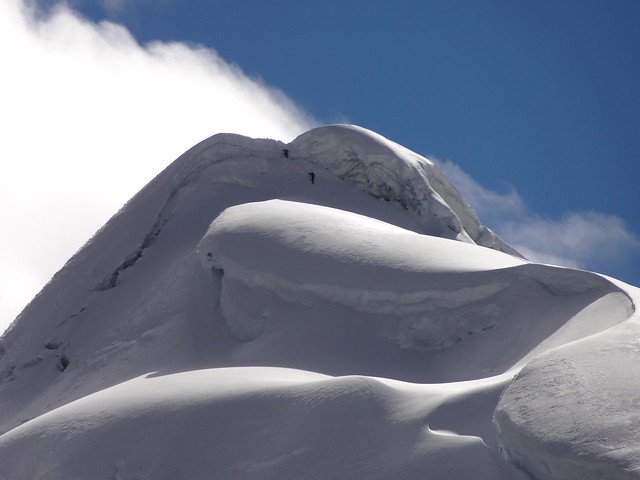 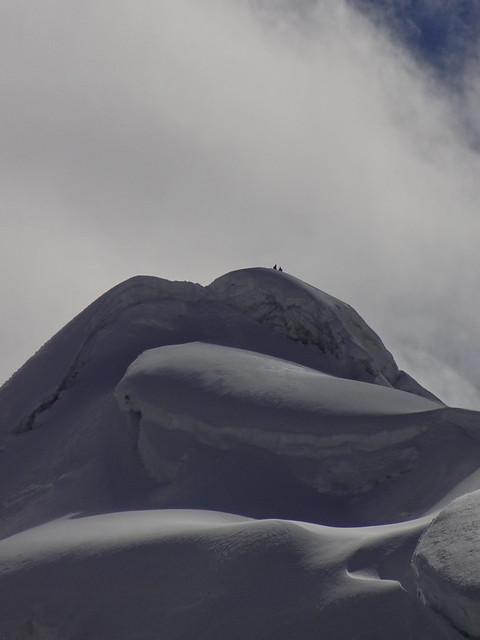 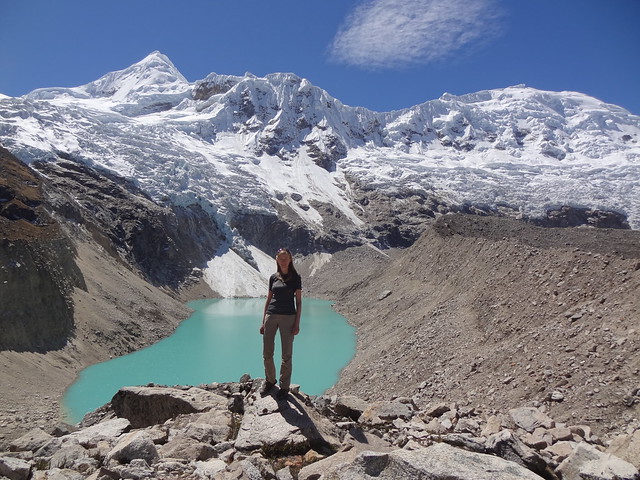 Me at Laguna Milluacocha © Mary Loosemore 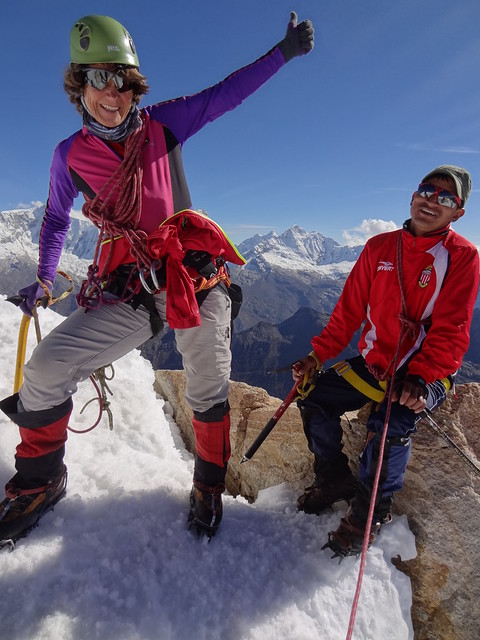 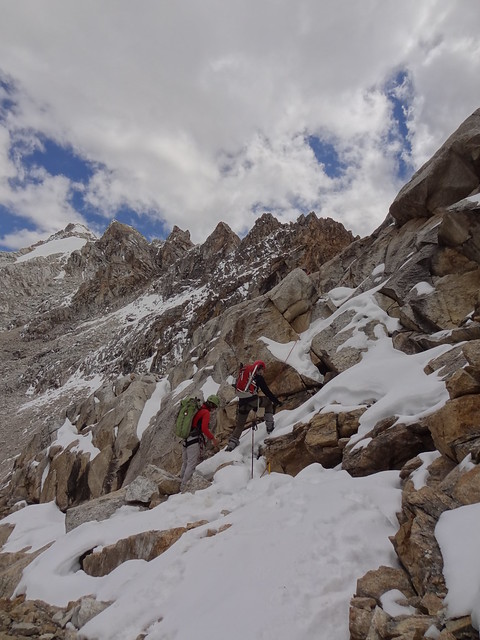 Roped up for the Aquillpo pass © Mary Loosemore 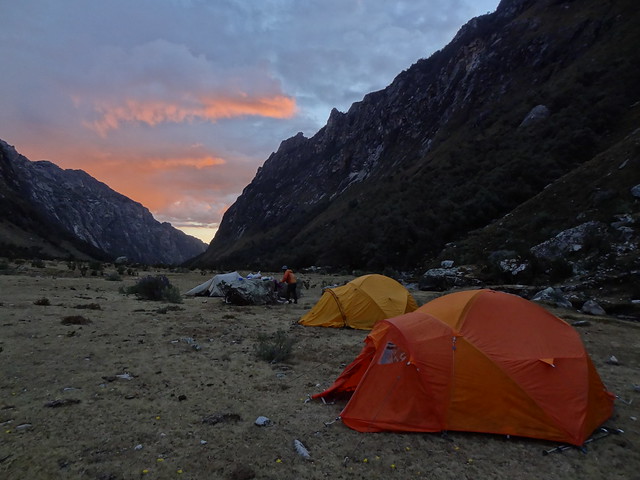 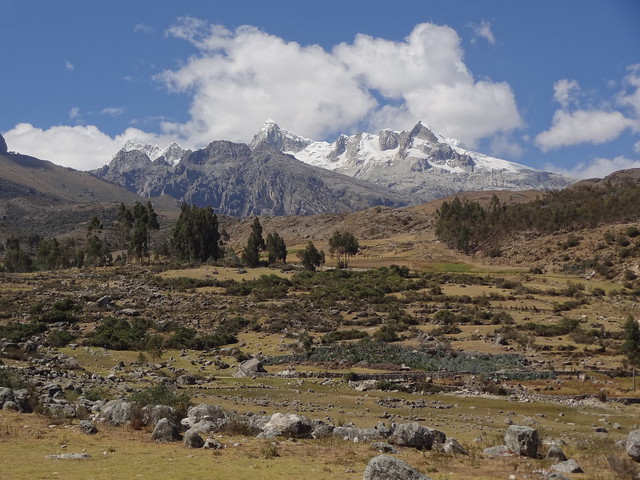 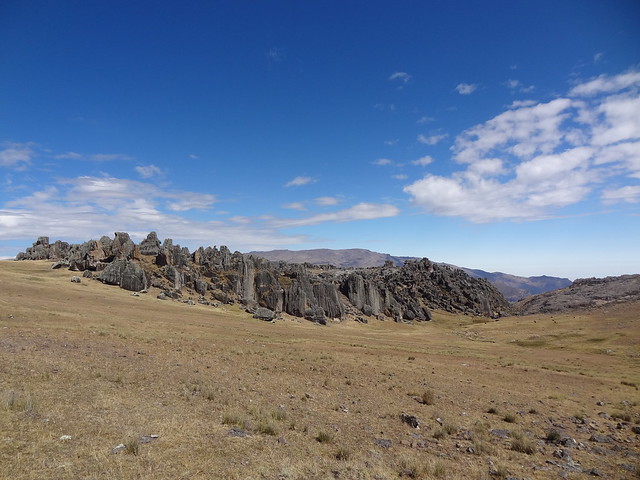 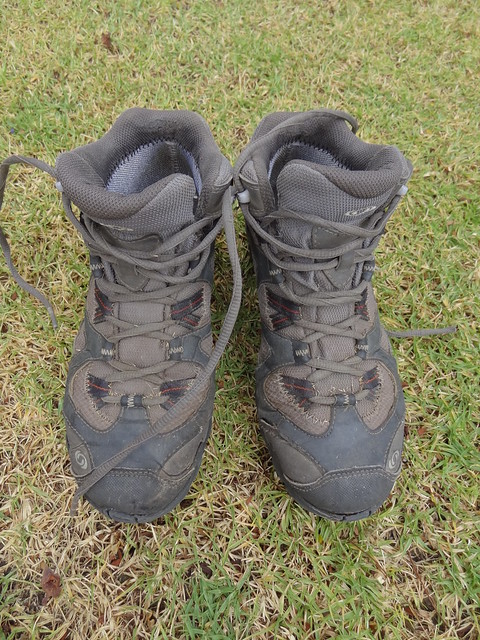